How do young Czechs sleep? Too little, say UP researchers 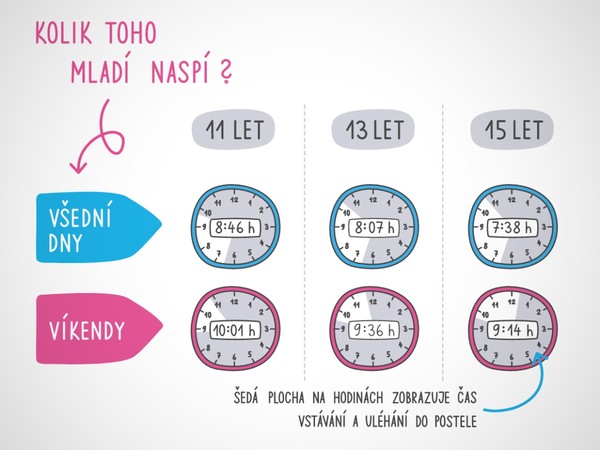 At least 40% of schoolchildren aged 11–15 do not get enough sleep on weekdays. Moreover, falling short of the recommended amount of sleep increases gradually with age – by the age of 15, up to one half of schoolchildren are sleeping less than they should. However, these are not the only conclusions that researchers from Palacký University Olomouc have brought forward. Other findings are also worth noting, such as the associations between sleep deprivation and obesity, low life satisfaction and depression. “Social jet lag” is a newly coined term in the vocabulary of children’s lifestyle experts.

The globally accepted standard for sleep duration are the recommendations of the US national agency Centers for Disease Control and Prevention (CDC). According to them, children (6–12 years old) should sleep 9 to 12 hours per day, and teenagers (13–18 years old) 8 to 10 hours. According to the latest findings of the international Health Behaviour in School-aged Children (HBSC) study, about 60% of schoolchildren sleep within the recommended range, but by the age of 15 only half of them do. According to a parallel study providing twenty-four-hour movement behaviours analysis, up to 75% of young people do not get enough sleep.

Czech children sleep an average of 8 hours, 8 minutes on weekdays. On weekends, holidays, and vacations, however, they tend to enjoy longer sleep, the average sleep time increasing by 90 minutes to 9 hours, 36 minutes. Time spent sleeping decreases with age. While 11-year-olds sleep close to nine hours on average on weekdays, 15-year-olds sleep just over 7 and a half hours.

“Finding out that young people don’t get enough sleep is important, but it’s not sufficient. In our research, we also focus on the context. We are interested in how sleep debt relates to other aspects of children’s lifestyles,” says Michal Kalman, head of the HBSC study research team from the UP Faculty of Physical Culture. He points out the fact that insufficient sleep has an impact, for example, on children’s psychological state (irritability, depression), their increasingly poor eating habits (skipping breakfast, higher consumption of energy drinks or chips). and an overall lower sense of satisfaction. It is also linked to physical and health problems, from headaches to being overweight to childhood obesity.

“Simply put, those who get enough sleep are much less likely to be overweight or obese,” adds Aleš Gába, head of the twenty-four-hour movement behaviours analysis research project at the UP Faculty of Physical Education. He also points out another important influence, which is screen time. Watching movies and videos, playing games or time spent on social networks tend to steal from sleep. It is for this reason that high screen time, together with insufficient sleep, is one of the major “obesity-causing” factors.

“The comprehensiveness of the research is one of the reasons why the World Health Organisation (WHO) supports these studies and puts great emphasis on the publication of their findings. The issue of healthy sleep is one that has long escaped public attention. And we would like to change that. The findings from the HBSC study as well as the report on physical activity, screen time, and sleep published last year under the WHO Childhood Obesity Surveillance Initiative (COSI), has provided data and evidence for politicians, schools, and parents to improve children’s health,” says Srdan Matić, WHO Representative in the Czech Republic.

Experts also bring attention to “social jet lag” – a significant discrepancy between biological and social time. What the body needs is one thing, and what happens to it due to social needs and conventions is another thing. In the case of sleep, for example, it is a matter of getting up too early for school. This is manifested in the markedly different sleep patterns on weekdays and weekends. Sleep duration is up to two hours longer at weekends.

Almost half of the ninth graders (45%) experience social jet lag. In total, more than a third of all schoolchildren aged 11–15 (36% of boys and 46% of girls) sleep at least two hours longer at the weekend than on weekdays. Such discrepancies that children’s bodies have to cope with have a negative impact on their health. Among other things, they are responsible for increased fatigue or perceived lack of energy.

Would social jet lag be alleviated if school started later? “We believe it would. Although it is not directly the subject of our research, some of the data suggest it. Sleep is limited by getting up for school on the one hand, and on the other by falling asleep late. Interventions are helpful at both ends,” Kalman concludes.

The UP team has been monitoring and commenting on factors affecting the health of Czech schoolchildren aged 11, 13, and 15 for a long time. The HBSC study is being conducted in collaboration with WHO. It deals comprehensively with the lifestyle of the young generation. In addition to new findings on sleep deprivation, it also focusses on physical activity, obesity, and risky behaviours (alcohol, smoking, marijuana). Forty countries from all over the world are involved in the study.

The twenty-four-hour movement behaviours analysis obtains information on the movement, sitting, and sleeping patterns of children and adolescents by measuring a smaller sample of the population. UP researchers monitored more than 700 children and adolescents continuously for seven consecutive days. They analysed the 24-hour day and night cycle as a whole. In addition to sleep characteristics, they also monitored the length and quality of physical activity and sitting.

Sleep and other themes in original training

Apart from the theme of sleep, the Olomouc researchers decided to prepare a total of ten topics in a form suitable for teachers, educational counsellors at schools, as well as parents. The result is an accredited training course in the Continuing Education of Educational Workers programme and a set of educational materials supplemented by infographics. The training presents a broader context of the HBSC study with all the essential data but also focusses practically on working with children in the classroom using experiential pedagogy.

Teachers and other interested parties will also receive an e-book packed with information from the research and sample activities on topics such as overweight and obesity, eating habits, and energy drink consumption, entitled Zdravá generace zážitkově [Healthy Generation: An Experiential Approach]. “The ministry has emphasised that teachers need to have the most up-to-date information on children’s behaviour; they need to be not only familiar with this data but also able to use it actively in their teaching. This original training course and other materials do a perfect job in this area,” says Jaroslav Faltýn, Director of the Department of Preschool, Basic, Basic Artistic and Special Education at the Ministry of Education, Youth and Sports of the Czech Republic.

For more information on the issue of sleep in Czech children, see the Healthy Generation website (in Czech only).